The Preceptory Meets at the Masonic rooms,
Jerusalem Street,
Limassol
On 3rd Saturday in January – 2nd Sat in May [Installation] and 3rd Sat in September.

The United Grand Lodge of England is the original Founding and Ruling Masonic Authority for Freemasonry in Cyprus; with St Paul’s Lodge No 2277 first consecrated in 1888. The Great Priory of the United Religious, Military and Masonic Orders of the Temple and of St John of Jerusalem, Palestine, Rhodes and Malta of England and Wales and its Provinces Overseas are the Ruling Authority for the Knights Templar Degree. The Templar Degree is one of the oldest of the “Chivalric Degrees” a strictly Christian Degree, members referred to as the Poor Soldiers of Christ and the Order of the Temple of Solomon.

Members have to be Master Masons of a least one years standing and Members of the Holy Royal Arch. Membership is very select and strictly by Invitation.

Great Priory in London through the aegis of R.E.Kt John Brackley K.C.T Great Vice-Chancellor gave permission for a Kolossi Preceptory to be Consecrated and the necessary Petition Forms were issued. The first Founding Sub-Committee Meeting was held in January 2011. Many hours were spent locating premises, obtaining and making the required Furniture and obtaining Regalia and approaching some 30 Founder Members – including 19 Brethren for Installation into the Degree.

Tremendous assistance and guidance was also given from the U.K by R.E.Kt Paul Clement G.C.T Great Marshal and E.Kt Robert Parrott PGt.WofReg. Great Priory then gave the singular honour to “Kolossi” by announcing that a Consecrating Team led by the Most Eminent and Supreme Grand Master Timothy John Lewis G.C.T would come to Cyprus to perform the Consecration and Installation Ceremonies in Limassol on Friday 25th May 2012, as opposed to the normal procedure of “Kolossi” going to Priory in London On Friday 25th May 2012 Members of the Great Priory led by the Most Eminent & Supreme Grand Master Timothy John Lewis G.C.T with His Consecration Team Convened a Preceptory at the Temple at 6 Jerusalem Street Limassol and 19 Companions. were Installed as Knights Templar.

A Gala Consecration “White Table” Festive Board followed attended by some 85 Knights, their Ladies and Guests

The next day, Sat 26th May a Tour was arranged to Kolossi Castle (with Bro. Angelos Kyriakoudes acting as guide) followed by a visit to the Ancient Curium and lunch on Curium Beach. 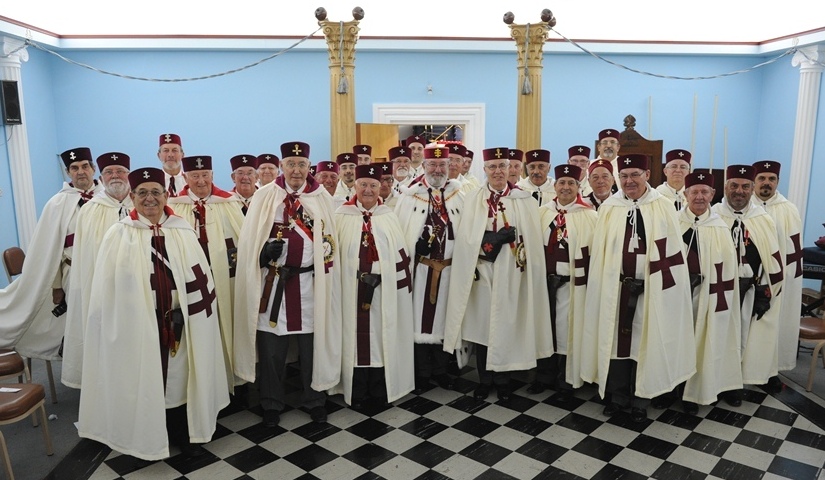 We shall be ever indebted to the Great Priory for England & Wales for their support, assistance and visit to Consecrate Kolossi Preceptory No 684