During research when Secretary of Othello Lodge No 5670, W. Bro. Peter van de Pol found references during the Consecration of Othello Lodge in 1938 in Famagusta to a “Kolossi” Knights Templar Preceptory being established. Shortly after consecration in the Othello Tower in Famagusta, Othello Lodge held all regular Lodge Meetings in the “Twin Tower” Knights Templar [circa 1299] and Knights Hospitlar [ circa 1450] Churches in Famagusta. No further trace could be found of a formal K.T Petition ever having been lodged as the outbreak of World War II appeared to have stopped further progress here. Peter had a dream of bringing the Knights Templar Degree ‘back’ to Cyprus and in 2001 first raised this possibility, but the timing was not right. However in 2010 The District Grand Master – R.W. Bro Theodosios Theodossiou gave his blessing and E.Kt Peter van de Pol was tasked as Organizing Registrar and a Founding Committee established consisting of E.Kts Theodosios Theodossiou – Andrew Theocharous – Eric Williams -Terry Knights and Dave Parrott. 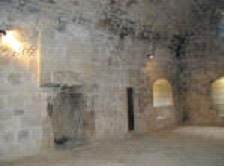